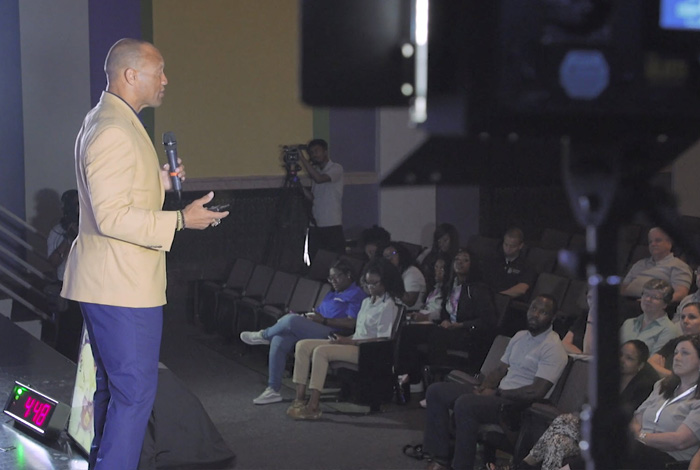 On April 27, Centene and the Pro Football Hall of Fame sponsored a Strong Youth Strong Communities (SYSC) summit for middle and high school students designed to offer mentorship opportunities and leadership training built on the pillars of commitment, integrity, courage, respect, and excellence.

SYSC summits have been held across the country since 2015, positively impacting thousands of teens. Centene serves as the official Youth Wellness Partner of the Pro Football Hall of Fame and partnered with community organizations including the Urban League of Middle Tennessee, the National Minority Quality Forum, and Tennessee State University to organize the event.

SYSC is the brainchild of Pro Football Hall of Famer Darrell Green, whose record-setting 20-year NFL career was spent playing for the Washington Redskins. Off the field, Green now dedicates his time to developing youth into the best they can be with a determination to providing them the tools to become as physically, mentally, and emotionally healthy as they can. "To get out in front of these young people, what else would I like to do with my life?" asked Green.

The summit kicked off with speeches from Green and his fellow Football Hall of Fame "Gold Jackets" Aenaes Williams and Bruce Matthews. "Each of us want to share a particular point, our stories, to encourage this next generation that there's nothing impossible, that they are all valuable," said Williams. Matthews' message was simple. "We're all going through something and I just want you guys to be encouraged."

This video captures the spirit of the summit, with the football greats sharing stories of their childhood, families, hardships, and faith with the students.

Aligned with Centene's focus on holistic health, breakout sessions were held to discuss issues impacting teens, including bullying, drug abuse, peer pressure, and suicide. These small-group sessions provided the Hall of Famers with additional opportunities to connect with participants.

During breaks, the youth also interacted directly with the athletes. Some even tried on Green's Super Bowl rings.

The positive effects of the summit were evident. 16-year old high school junior Maya McGill said, "I learned that I am definitely important in society and this whole community. It was very inspiring." High school senior Rodney Starr commented, "The common message was that hard work pays off and you're valuable."